What a Great Vacation! 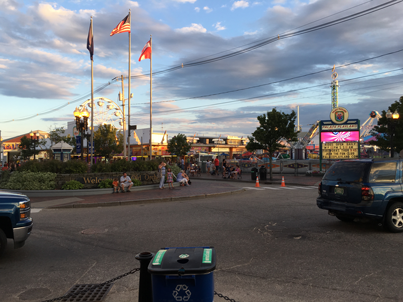 We had a great vacation in Old Orchard Beach, Maine and, as usual, it came to an end much too soon.

We were able to stay a couple of extra days so that our vacation overlapped with that of my sister and the older of my two younger brothers by two days. We had a great time catching up. Although my two brothers both live in Ottawa, as I do, my sister lives west of Toronto. With the drive taking about five hours, we don’t see each other very often. So, it was quite a treat to get together in Old Orchard Beach.

One of the delights of being retired is that there was no rush for us to get home. Normally, of course, we have to return to work and that tends to put a hard stop on our vacation. Since we’re both retired, we were free to extend our vacation as we saw fit. So, it was a pleasure to discuss what to do next.

In the end, though, we decided to drive home as usual. Lack of imagination, I say. 🙂

We took our Volkswagen Golf TDI for this trip. Yes, it’s part of the Volkswagen diesel emissions scandal. I’ll have more to say about that later, but we really love the car. One the way home, we were able to get 4.6 liters per 100 Kilometers, which is how fuel economy is specified in Canada. That’s about 51 miles per US gallon!

One of the reasons we chose that car was that it’s fuel economy is so good. Keeping your operating costs low is an important part of retiring early. Of course, that doesn’t mean that you should spend huge amounts of money acquiring something that saves you a little bit of money every month. Clearly, there’s a tradeoff involved. But, we have really enjoyed the car. With more car travel part of our retirement plans, the great fuel economy is nice to have.