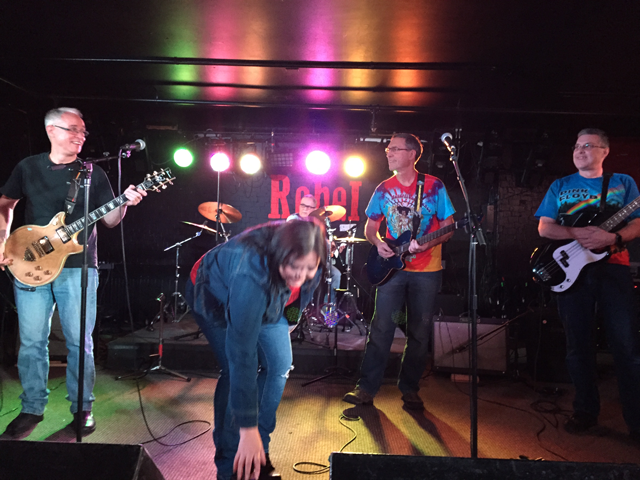 If you’ve been following my blog for a while, you know that I took lessons for bass guitar and piano in the first half of 2016. I used to play bass but hadn’t really played since about thirty years ago, when I was in the University of Waterloo Computer Science Grad Band. We used to play at various Computer Science department functions including dances. It was a lot of fun, but after I graduated that was pretty much the end of bass playing for me.

When I visited my good buddy and guitar player, Jim Amsden, in Raleigh, North Carolina, he said that I should bring the bass guitar so that we could jam together. It seemed futile to me because it had been so long since I had played. But, Jim insisted. Well, I had a great time playing bass with him, even though I was barely playing. 🙂 When I got back to Ottawa, I signed up for bass guitar lessons. I also decided to take piano lessons to expand my horizons.

I’ve hired and done video work for Christopher Paine in the past, and through Chris I met Dick Cooper, of the band, The Cooper Brothers. Dick has been a television producer and worked with Chris on some video gigs and I helped on a couple of them. That’s how Dick found out that I was taking lessons for bass guitar.

The League of Rock logo.

It turns out that Dick Cooper is a key member of The League of Rock, an organization for amateur musicians to get out of the basement and get on stage. Their slogan is, “Join a Band, Learn from the Pros, Gig, and Record a CD all in 10 weeks.” In their September session, they were short a bass player and a singer for one of the bands. So, Dick called me to see if I was interested. I was!

I was assigned to one of the five bands. We met before our first scheduled practice to discuss what songs we wanted to perform. After each of us submitted our favourites, we came up with a short list of about six songs. We practiced those songs and then selected our top four songs from that list, and that’s what we’ve been working on all along. The four songs are Constant Craving by kd lang (live version), Summer of 69 by Bryan Adams, Kryptonite by 3 Doors Down, and Take Me Down by The Pretty Reckless. We also came up with a name for our band, Shades of Grey.

Scott plays bass at the Brass Monkey with the Shades of Grey on November 30th, 2016.

As luck would have it, we started short a guitar player, then we had one briefly, and then we were back down to one guitar player. At that point, I suggested my buddy from high school, Rick Martin, who had been through the League of Rock experience twice. So, Rick joined the band, fulfilling a high school dream of ours to be in a band together some day.

IShades of Grey has been a blast so far. Still to come are a couple of practices, then we’ll record a song in a studio on December 11th, and then play at the Greenfield Pub on Greenbank Road on Thursday, December 15th. Tickets are $10 at the door and you’ll see us and four other bands. That will wrap up the League of Rock for this session.