Choosing the RV of Our Dreams – Part 2 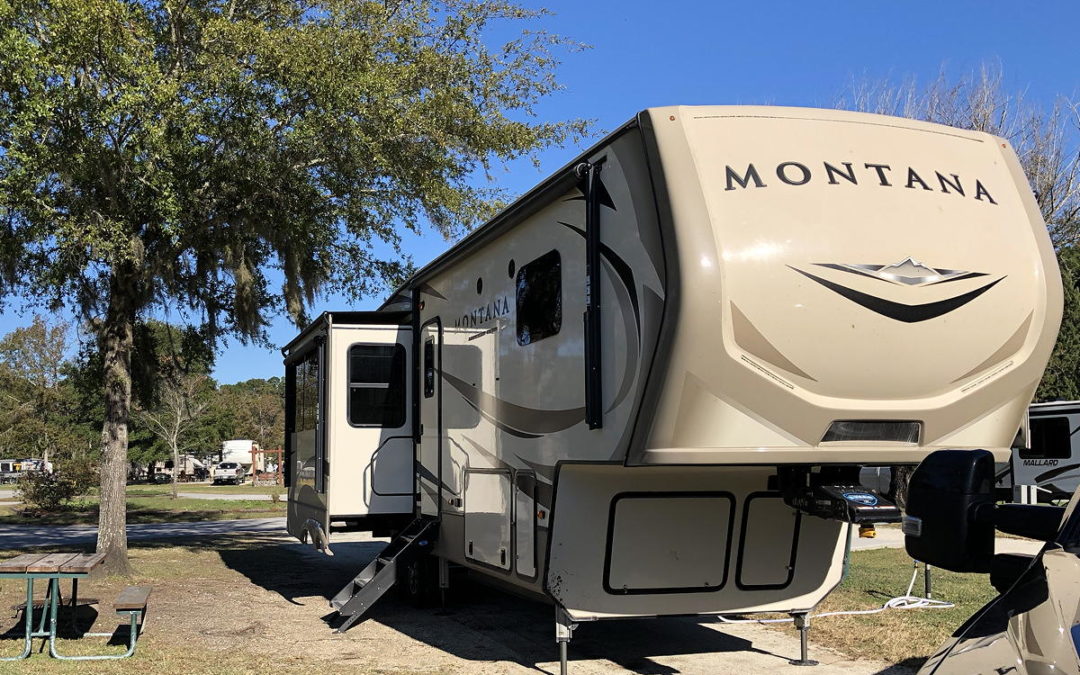 In part 1 of this series, we looked at travel trailers. In part 2 below, we look at fifth wheel trailers.

What About Fifth Wheels?

Essentially, these work similarly to big tractor trailers. There’s a hitch in a the bed of a pickup truck that accepts the pin from the pin box seen in the picture above.

The first thing we noticed was that they are much nicer inside than the travel trailers. They look like modern homes with the latest in styling. They are much roomier. They typically have three or more slide-outs, which are parts of the trailer that extend out when parked and level to give you more room. They also have a “basement” that can hold a lot more than the “pass-thru” compartments in the Apex trailers we’d seen. Overall, they just feel more like homes.

After looking at several fifth wheel trailers, we narrowed the choice down to two. The first one was a Chapparal Lite 285RLS, a 33-ft 7-in fifth wheel with three slide-outs.

The first thing we noticed was how roomy the trailer was and the very nice materials. The counter-tops were like a modern model home, the shower was roomier, and there was more seating available, which would be important for when we had guests. Overall, the feeling was more like that of a model home than what we’d seen in the travel trailers.

One key characteristic of a fifth wheel trailer is the raised section where the pin box attaches to the fifth wheel hitch in the pickup truck. You can see that in the floor plan above. Look at the step leading up to the bathroom and bedroom. Many fifth wheels, including this one, are highest at this area to give you headroom in the bedroom when you are several feet above the pavement.

This trailer had a GVWR of 11,000 pounds and a hitch weight of 1,497 pound, which is approaching the limit of most half-ton pickup trucks, the most common ones you see.

The next fifth wheel trailer we looked at was the model up from this, a Chapparal 295RLS.

Indeed, without the “Lite” designation, this trailer had a GVWR of 12,000 pounds and a hitch weight of 1,935 pounds. For fifth wheels, the hitch weight is a higher percentage of the overall weight than for the travel trailers we’d been looking at earlier. In this case, we’d be looking at a heavy duty truck to tow this one. Since we hadn’t purchased a tow vehicle yet–because we didn’t know what we wanted to tow yet–this wasn’t a cause for concern.

Other things that struck us about this model were the overall higher level of decor and a much larger shower. This was a shower in which you could be very comfortable without banging your elbows on the glass.

We were pretty happy with the Chaparral fifth wheel trailers, especially the 295RLS with the larger shower and nicer interior. Nevertheless, we thought we should look at several different models before deciding. This would allow us to see a wider variety of trailers. After all, we might see something that we hadn’t seen before that we really like.

The first other dealer we visited was the Ottawa location of RV Canada. We saw some very nice travel trailers and fifth wheels there. We liked the big front window of the Jayco 25FK travel trailer and, as the name implies, the front kitchen. We say the Highland Ridge 291RLS travel trailer. We also liked the 33-foot Highland Ridge LT291RLS fifth wheel trailer. Ironically, it had a floor plan that was very similar to the one we eventually bought. We also looked at an Alpine 3500RL, a 39-foot fifth wheel. Its floor plan was also very similar to the one we bought. It was also a sister model made by the same company.

We looked at the Eagle HT 26.5RLDS, a thirty-foot fifth wheel. We also looked at a few high-end Pinnacle fifth wheels. However, in the end, we found that the sales people were a bit too aggressive for our tastes. We left the dealer with no plans to return.

Next, we visited 417 RV, located east of Ottawa just off of highway 417 at exit 88, Vars. The sales people here were quite laid back and we were much more comfortable with them. We also met the manager, Joel. He was a really nice fellow.

They had a variety of trailers, of course. After explaining what we were looking for and what we’d seen already, they pointed us to two lines–the Montana High Country and the Montana line of fifth wheels.

The Montana High Country models were very similar to the Chaparral models that we’d seen at Primp Trailer Sales. However, the Montana fifth wheel were a cut above in their decor and other features. Of course, they were also more expensive. So goes the very slippery slope. Nevertheless, we quickly focused our attention on the Montana lineup.

Why did we like the Montana fifth wheels so much? They had very modern interiors that were much nicer than our four bedroom house that hadn’t been redecorated since we bought it new in 1990. They had eighteen-cubic-foot refrigerators, the largest by far that we’d seen. Also, we really liked a lot of the nice touches found in them. Finally, we could appreciate the value of features such as auto-levelling that make setting up at a new campground much faster.

There was one more really key features for us in these Montana trailers. They were warranted for full-time RVing. The Chaparral warranties were limited to no more than 30-day trips with substantial gaps between the trips. The Montana trailers, on the other hand, were warranted for full-time occupancy and four-season weather. They were rated down to zero degrees Farenheit, which is about -18 degrees Celsius. We had–and still have–no plans to be in weather that cold. In fact, we don’t really like to be in weather below freezing, but sometimes we might encounter that on the way from our home in Ottawa to warmer climates. Nevertheless, we liked the idea that they could handle the cold and were warranted for full-time occupancy.

By now, we were becoming familiar with the nomenclature of trailers. The RD in this model’s name refers to a rear den. It’s elevated, leaving a very large amount of storage underneath the den. Most fifth wheels we looked at are highest at the front so that you have headroom in the room at the front. On this model, the roof was high all the way from the front to the rear. This gave the raised bedroom at the front and the raised den at the back an equal amount of headroom. The kitchen and dining area were in the middle between the two raised areas.

This trailer was owned by a fellow who customized it to have an exterior kitchen. Then, the owner traded it in on a newer model, losing a lot of money to the quick depreciation of brand new trailers.

We really liked all of the storage in this unit. There was a cavernous sliding storage shelf at the back of the trailer that slid underneath the raised den. Along the sides of the den were more storage compartments. If you have a lot of gear to bring, perhaps if you’re a member of a band and need to bring the band’s gear :-), this is the trailer for you.

However, there was a drawback. Compared to the other two Montana models, the den really felt separated from the kitchen and dining area in the middle. You wouldn’t think that two steps up would make much of a difference, but to us it really did. We were also somewhat reluctant to buy a used trailer, not knowing what it had been through so far. That’s ironic because we’ve since heard advice to buy trailers that have been used for about two years so that all the inevitable problems with new trailers have been fixed.

Another concern for us was the size of the unit. We’ve never towed anything before, not even a utility trailer. This fifth wheel was about 41 feet long and we were a bit worried about starting with such a large unit.

Like the 3790RD, this trailer is about 41 feet long. That sure does make for a roomy trailer! However, for us it was a bit of a concern given our lack of experience with towing. It had a very large kitchen (hence the LK suffix in the name) at the rear of the trailer and it wasn’t raised. So, it all felt like one big area, which we liked. However, that sacrificed all the extra storage of the 3790RD, leaving the basement at the front of the trailer, under the bedroom, as the main storage area. However, that’s a pretty large space.

We liked the two sofa beds in the center of the trailer because they provided sleeping arrangements for four more people in addition to the main bedroom–a feature shared with the 3709RD. Overall, we really liked this one except for it being such a long trailer.

Lastly, we looked at the Montana 3120RL. This was a 2019 model and happened to be tagged with the 20th Anniversary Edition moniker, shown in raised lettering on the sides of the trailer. The most notable change for this model year was some beautiful indirect interior lighting provided by rope LEDs hidden underneath the counter-tops and also hidden in a panel above the large light over the kitchen island. Both of us really liked this.

Interestingly, the bedrooms of all three trailers were pretty much the same. They all had king-sized beds in them, an optional extra. They all had 32-inch televisions in the bedroom and 50-inch televisions in the entertainment area. The bedrooms also had very large closets–appropriate to longer trips–and rough-ins for stackable washers and dryers, which can be a real convenience. These fifth wheel trailers looked very promising to us.

There were still a few more things for us to think about before making a final choice. Part 3 of this article goes into more details on the last part of our story!